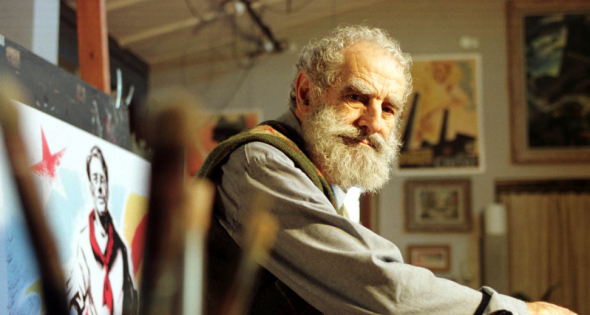 Carles Fontserè was a stage designer, illustrator and advertising artist who drew some of the most iconic political posters of the Spanish Civil War. After the fall of the Second Republic he fled to France ahead of the Nationalist advance, and was interned in several French concentration camps. In 1939 he made his way to Paris, where he continued his artistic career.

Subsequently, in 1948, he travelled to Mexico to collaborate on a Parisian-style revue with Mario Moreno, aka Cantinflas. Moving to New York one year later, he worked as an illustrator, taxi driver and photographer.

Carles Fontserè designed stage sets with Salvador Dalí, including working together on the performance art production, “A Happening with Salvador Dali” at the Lincoln Center in Philharmonic Hall in 1966.

He finally returned to Catalonia in 1973 with his American wife of Catalan heritage, Terry Broch. They settled in Porqueres (Girona) and built a house and studio in the nearby hills. Fontserè was awarded the Creu de Sant Jordi medal by the Catalan government in 1985, and in the early 1990s he began writing his memoirs, which have had a remarkable international impact.